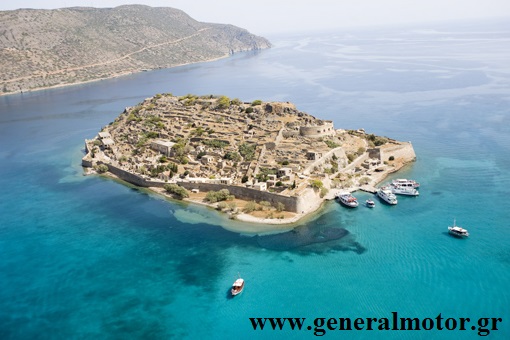 Spinalonga is a small island near Elounda in East Crete. Spinalonga  is also known as the Leper Island, as that is where lepers from Crete and the rest of Greece were quarantined until 1957.

Today thousands of tourists visit Spinalonga each summer by boat from Agios Nikolaos, Elounda and Plaka, for a tour of its ruined buildings, which the Archaeological Service is laboriously trying to maintain.

According to the data for 2009, Spinalonga has 1200-1500 visitors daily during the summer months and is the most popular archaeological site in Crete after Knossos.

The strategic position of the rocky islet for the control and defence of Elounda harbour could not but mark Spinalonga with a turbulent history of fierce battles and much human suffering.

Today the name Spinalonga is only applied to the islet, but the Venetians used it to include the large peninsula of Nissi or Kolokytha, which is connected to Elounda by a narrow isthmus.

Apparently Kolokytha used to be joined to Spinalonga (which is why it shared the same name), but in 1526 the Venetians cut a canal between the two, forming this small island.

This information comes from the Venetian cartographer Vincenzo Coronelli, but it may not be true. However, the islet is only 170 metres from Kolokytha and the water is shallow, so perhaps the Venetians did indeed carry out this project to form an impregnable island fortress.

The name Spinalonga appeared around the 13th century, bestowed by the Venetian conquerors, who, unfamiliar with Greek, corrupted the place-name “Stin Olounda” (“at Olounda”), originally to Spinalonde (13th century) and later to Spinalonga. It is no coincidence that the small island of Giudecca near Venice was also known as Spinalonga.

According to another interpretation the name of the island is derived from its shape, like a long thorn (spina longa), but this theory is not widely held.

Much later, in 1957, another name, Kalydon, was proposed for the island, in an unsuccessful attempt to replace the Latinate Spinalonga with a Greek name.

How to get to Spinalonga

To get to Spinalonga you must take the boat from Agios Nikolaos, Elounda or Plaka.

From Elounda harbour, there is a boat to Spinalonga every 30 minutes throughout the summer. It takes about 15-20 minutes to reach the island, while the sea voyage sometimes includes a sail around the Kolokytha Peninsula.

There are also boats from the little village of Plaka just north of Elounda. The trip from here is shorter, taking about 10 minutes, as Plaka is directly opposite Spinalonga.

There are no scheduled boat trips to Spinalonga in the winter, and you will have to find a boat owner to take you across. This shouldn’t be too difficult - just ask at the seafront tavernas in Plaka, as most people have their own boats for pleasure and fishing.

If you visit Spinalonga outside the tourist season, the chances are you won’t meet anyone except the archaeological team working there. In summer, on the other hand, apart from the floods of tourists, there are also tour guides offering their reasonably-priced services to individual tourists.