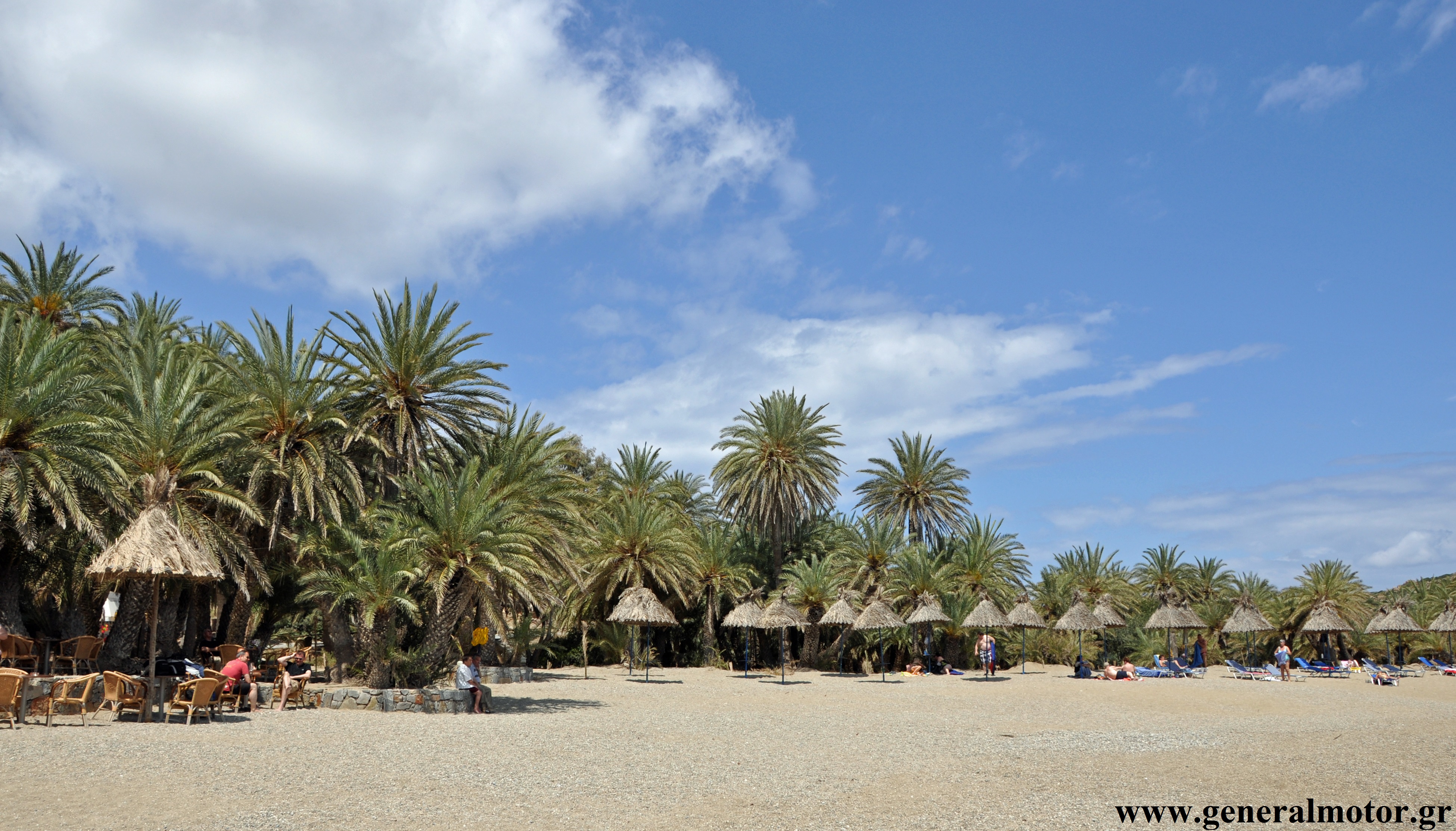 The famous palm beach of Vai.
Vai is one of the largest attractions of the Mediterranean island of Crete. It features the largest natural palm forest in Europe, made up of palm tree Phoenix Theophrasti.

For tourism Vai was discovered at the end of the 1970s by the last Hippies who fled the hot-spots Matala and Preveli.

In the beginning of the 1980s, Vai was full of backpacker tourists from all over the world, leading to a mixture of chaotic campground and garbage dump. It was then enclosed and declared a protected area. The unique forest recovered, the beach became clean.

The beach is well organized and an example of combining facilities with respect to the natural environment. The Palm Beach, which belongs to the Monastery Toplou, is the touristic center of East Crete, with thousands of visitors each year. Vai lies close to Paleokastro and Sitia.

It's name derives from the word "vagia" meaning "palm tree" or "rims of palm tree" in Greek. According to a local legend, the forest grew from cores of dates thrown on the ground by Arab pirates or Phoenician merchants set ashore. Within a space of 60 acres there are some 5.000 perennial trees, a real oasis in the desert-like landscape of Eastern Crete. The core of the forest is fenced but access is allowed every day from sunrise to sunset, all year round; overnight stays and camping within the forest are not allowed.

The forest is located at the exit of a quite narrow valley and ends at the beach. Within the forest is a spring of good sweet water and a small brook with numerous oleanders within the riverbed. The forest is unique not only for its beauty but also for the species of palm trees it's comprised of. A forest of the "phoenix theophrasti", as is it's botanical name, can be found in Europe only in Vai and on the Canary Islands.

The whole landscape contributes to this inconceivable beauty: the thick sand forms dunes, whilst on the nearby low hills you can find rare plants with extraordinary flowers (mainly in spring). The best seasons for a visit to Vai are spring and autumn, as in summer it is pretty crowded and too hot for walks. If you visit it in the summer, try to stroll around before 11.00 in the morning, or after 5.00 in the afternoon. For more privacy, walking northwards along the beach you can find some smaller beaches which are less crowded but equally beautiful.

For those interested in archeology, the site of Itanos with its ruins of the ancient city sunk in the sea are merely a 2 km drive northwards away. If you are lucky enough to have a yacht or a small boat, you may also visit the islet of Elassa, at some 3,5 nautical miles east of Vai.